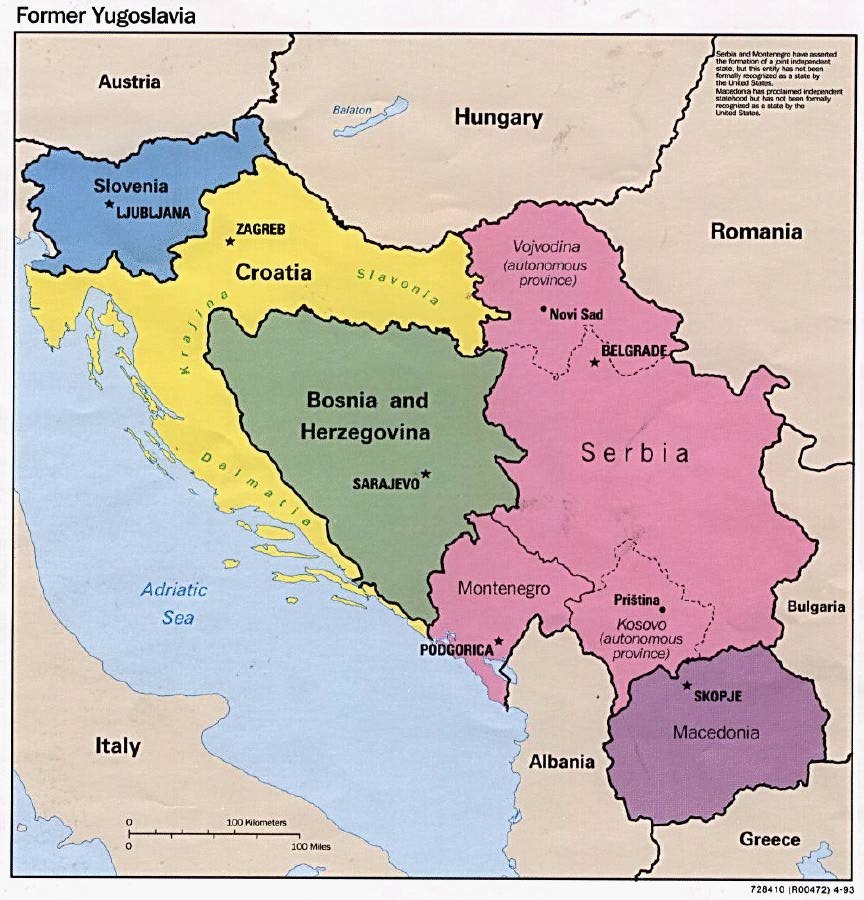 Quick Summary of the History of the Balkans

What is a Balkan?
In Turkish it is a mountain. Makes sense considering the geography.

Some blame the Turks, but to be one up on them and since we visited Italy too, I will blame the Romans: 300 or so A.D.: the great schism, dividing the Western and Eastern portions of the Christian Church. Where? Right down the middle of the Balkans.

So now you have Catholic Croatians in the West and Orthodox Serbs in the East.

In 1389 the Turks whipped the Serbs in Kosovo at the battle of Kosovo Polje. They proceeded to take over much of Serbia and Bosnia, but not Croatia. Many local people, especially in the towns, converted to Islam. So over a period of 500 years you got: Bosnian Muslims. Actually you got numerous Muslims in some areas of Serbia too, but who's counting? Oh yes, and this also had the effect of moving quite a number of Serbs into areas near the Bosnian-Croation border near Dalmatia.

The still-Christian Serbs didn't like living under the Turks, and many simply didn't like the Turks. They would periodically revolt, but the Turks periodically made it clear that they did not like revolting Serbs, and put them down.

Not to be outdone, the Austro-Hungarians occupied Bosnia and Croatia in the nineteenth century, and increased the influence of their culture, especially in Croatia.

The Nazis and Their Friends

Now we are really getting warmer. The Germans occupied the area during WWII with assistance of the Italians. The Croatians got a government that was not just collaborationist, but enthusiastically and brutally fascist. They eventually killed some hundreds of thousands of Serbs, Gypsies, and others, many in extermination camps.

The rest of the country got Cetniks and Partizans. The Cetniks were Serb nationalist, royalist fighters. The Partizans were more broad-based, and led by Josip Broz, generally known by his nickname "Tito". The Partizans proved to be much more effective, more respectable, and eventually won the official support of the western allies. When the war was over and the Germans left the region without invasion by either Russia or the West, Tito was undisputed leader.

Tito brought communism because he was already a communist, not because the Soviet Union enforced it. He brought his own liberal brand of communism, and famously did not submit to Stalin. After Tito died in 1980 things got increasingly messy. There was a lack of strong central power, and as the Soviet Union crumbled, western aid to Yugoslavia withered, leading to inflation and less rosy economic times.

By 1990, Yugoslavia started to disintegrate.

Yugoslavia after Tito wound up in a position where there wasn't enough central authority to hold things together, and it lacked the institutions and the leadership to allow it to come apart gracefully.

Detailed map of Bosnia today in PDF format.
Nonfiction: Good People in an Evil Time, by Svetlana Broz
Truly extraordinary book that collects accounts of ordinary people describing their experience during the war in Bosnia. The introduction and author's preface are simply not to be missed.
Nonfiction: The Fall of Yugoslavia: The Third Balkan War, by Misha Glenny
Relatively brief, personal, highly engaging account of what happened and why as the wheels came off, to say the least, in what was then Yugoslavia.
Historical Fiction: Bridge on the Drina, by Ivo Andric
Winner of 1961 Nobel Prize for Literature
Fiction: Death and the Dervish, by Mesa Selimovic
One of Riki's most highly recommended works of Bosnian literature.
Movie: Welcome to Sarajevo
Unusually realistic Hollywood portayal of life in Sarajevo under siege.
Movie: Three Kings
Shows how individual and group behaviors can change, and the bizarre become normal under war condition

Goering: Why, of course, the people don't want war. Why would some poor slob on a farm want to risk his life in a war when the best that he can get out of it is to come back to his farm in one piece.

Naturally, the common people don't want war; neither in Russia, nor in England, nor in America, nor for that matter in Germany. That is understood. But, after all, it is the leaders of the country who determine the policy and it is always a simple matter to drag the people along, whether it is a democracy, or a fascist dictatorship, or a parliament, or a communist dictatorship.

Gilbert: There is one difference. In a democracy the people have some say in the matter through their elected representatives, and in the United States only Congress can declare wars.

Goering: Voice or no voice, the people can always be brought to the bidding of the leaders. That is easy. All you have to do is tell them they are being attacked, and denounce the pacifists for lack of patriotism and exposing the country to danger. It works the same in any country.